The Subconscious is the bridge that connects the Mind to the Body, making it Spiritual.

The subconscious is a self-defense mechanism. It stores unresolved traumatic events that prevent us from functioning. (Immense implications) "What the superior man seeks is in himself; the small man seeks in others."

This article presents the subconscious mind's role in an unconventional approach and its far-reaching impact on our mental and physical health, including autoimmune diseases, cancer, mental disorders, and addictions. Removing unresolved traumatic memories from the subconscious and transferring them to the conscious does not require forgetting those events but releasing them!

The subconscious includes deciphering the supersensible and conveying messages to the body and mind.

As you delve deeper, you will find that the subconscious has more and more meaning in our daily lives.

The subconscious is part of the self-defense mechanism required for survival.

Where does the subconscious reside?

Does the subconscious have other functions besides protecting us from traumatic events?

Instinct is a survival mechanism, bypassing logic but different from intuition. (Intuition is attributed to the subconscious)

The subconscious mind is a "virtual safe" for unresolved traumatic events from our past. It has an immense impact on our physical & mental health. Therefore, it cannot be easily penetrated.

The subconscious is a "virtual safe" for unresolved traumatic events from our past. It has an immense impact on our physical & mental health.

Autoimmune diseases, youth cancer, addictions, stuttering, and even mental disorders often result from unresolved traumatic events from our past.

Why is it tough for any person to recreate traumatic events from their past?

An energetic blockage is usually caused by the inability of the subconscious to withstand the burden (a kind of break-in) that can cause the following symptoms/diseases:

Modern medicine has adopted the mechanistic conception of massive drug use.

Unresolved traumas are an individual matter. It is difficult to assess the present and identify the traumas from the past.

From what age can unresolved mental traumas be accumulated in the subconscious mind?

Is it possible through hypnosis to go back to the pre-fetal date in previous incarnations?

Why does a load of traumatic memories sometimes erupt from the subconscious mind in the form of illnesses or addictions?

What steps must be taken to release unresolved traumatic events from the subconscious?

There are two main steps in the process:

The release of traumatic events is a challenging process that can sometimes take quite a long time. Without the release of the traumas, it is difficult to recover from chronic diseases and addictions. It took me several years.

Profound sleep can penetrate the subconscious. (Then we also dream)

Why do people tend to go to psychotherapy? (partial list)

Are psychological treatments unnecessary in cases of attempts to reconstruct unresolved traumas?

Patients with chronic illnesses whose disease onset at a young age (30-35) and under should consider hypnotherapy. (Authorized only)

Many people have a deep-seated fear of hypnosis treatments, partly because of the negative image created of hypnosis by entertainment performances. Hypnosis (and similar techniques) has the possibility (almost exclusively) of penetrating the subconscious and releasing unresolved traumas. Addicts, autoimmune disease patients, stuttering, and Tourette's syndrome of all ages are also advised to use hypnotherapy.

The use of hypnosis may be perceived by many as unrelated to their illness, but the release of unresolved mental traumas has far-reaching effects on the body. Hypnosis can penetrate the conscious mind, eliminate unresolved traumatic events, and improve patient recovery chances. It is especially recommended for chronic patients whose disease onset at a young age (30-35) and below.

Hypnosis has a mysterious and sometimes even dubious image due to the misuse of live performances, but it is a medical procedure of paramount importance.

What other techniques than hypnotherapy can penetrate the subconscious mind?

I usually advise chronic patients to consider these tools. (Except for psycho-chemical drugs)

Techniques can treat the symptoms of energetic blockages without penetrating the subconscious mind.

My spiritual experience changed my life.

I was lucky to attend one of Dr. Nader Butto's seminars in March 2012. At that time, I was in critical condition.

After all, is quantum entanglement an informed possibility for the phenomenon of telepathy and intuition?

According to the laws of physics today, quantum entanglement cannot transmit information at speeds exceeding the speed of light.

The idea is to develop the mathematics of emotions, behavior, thoughts, and the subconscious.

A brief review of the lesser-known features attributed to the subconscious.

The Pineal Gland - A "superior synchronization" organ is necessary at the physical-mathematical level.

Its unique location, blood supply, endocrine function, and physiology have made this small gland a plausible candidate for the title of the "subconscious gland." The fact that it exists in other mammals should not surprise us. Surprisingly, this unique gland has been studied very little beyond endocrine function.

Is a larger pineal gland indicates better intuitive and telepathic ability? (Probably so, but this supposition has no scientific support or basis)

The French philosopher Rene Descartes believed that the human pineal gland is "the main seat of the soul."

The pineal gland can be illustrated by analogy with computers, to WiFi and a Bluetooth card, but with far more advanced capabilities, seemingly, with no distance limit.

The Subconscious is a potent tool that aims at self-defense. Therefore, it is not surprising that females have a larger pineal gland.

The fact that most mammals have a pineal gland should not surprise us. The subconscious has a vital role in self-defense, even in developed animals.

The fact that the pineal gland shrinks is part intentional and part consequential.

Calcification is an undesirable result of an unhealthy diet from fluoride salts. (Found in drinking water and toothpaste)

Blinking has another critical function of the "antenna of the subconscious."

Link: Blinking has a vital function as the "antenna of the subconscious."

Dreams express sorting memories by the subconscious and cataloging them to make room.

The accepted explanation for yawns is that yawning is intended to cool the brain. I offer a different, more likely explanation.

Link: Yawning is designed to lower the brain's gear to save energy.

We frequently use the subconscious, usually without being aware of it. 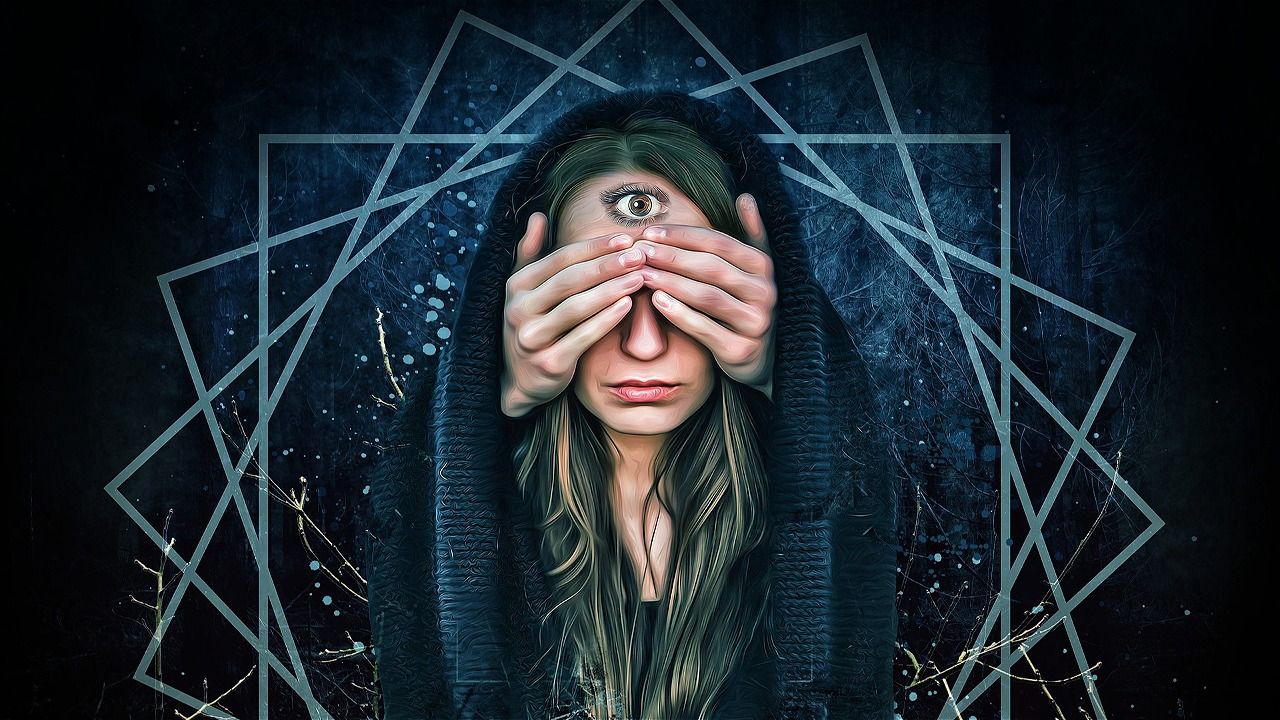 It is worth distinguishing between intelligent guessing and intuition, not based on previous experience and logic!

If you search for definitions for intuition, you will find a lack of uniformity. To me, most definitions are too simplistic. Link: Intuition (Wikipedia)

Does intuition exist in all of us?

Is intuition a trait that can be developed?

Instinct is a mechanism of survival, bypassing logic but different from intuition.

Is the size of the pineal gland the explanation for the seemingly better intuitive ability of women compared to men?

Every year millions of MRI scans of the brain are performed, and autopsies can be used to study the size of the pineal gland.

I knew years before I discovered I had liver cirrhosis that I would get sick and recover against all odds.

Advanced telepathic abilities are attributed to aliens! (Interesting where the knowledge comes from) Do telepathy and intuition exist in reality or only in movies?

What are the differences between intuition and telepathy?

The pineal gland in the brain is considered the telepathic organ. It also exists in other mammals, including monkeys.

Today, institutional science sees these phenomena as pseudo-scientific—part of the para-psychology of strange and unexplained phenomena seemingly contradict the known physics principles. Many studies confirm the telepathy phenomenon far beyond statistical probability.

Is there a possible scientific explanation for this phenomenon of telepathy, intuition, telekinesis, and more?

The premise is that everything in nature can be expressed through mathematical formulas combined with the human senses' logic and expressions.

What does it take to prove or disprove that we live in a computer simulation?

The answer to this question seems very simple; it is clear that we live with free will. Leading scientists, physicists, and philosophers have dealt with this question without unequivocal conclusions.

Is computing power strong enough to simulate all human beings at the theoretical level? Akashic Records - The Unlimited Knowledge of the Universe. (Virtual Library)

The idea of an Akashic library is somewhat reminiscent of today's cloud technology.

It is challenging to recover from a long list of severe chronic illnesses without removing unresolved traumas from the subconscious. The pineal gland - At the physical-mathematical level, it is likely to assume that a "superior synchronization" organ is necessary. The deep and hidden meaning of intuition, telepathy, and telekinesis is profound; it opens a window to a magical and unexplored world.

The meaning of the supersensible phenomena is that our perception of the time-space dimension is probably wrong! The future may have happened in another dimension; only we cannot retrieve the information.

May interest you:
Kübler-Ross model | Explains the behavior of personal loss.
The Unifying Model of Addictions with its unique Energy-reward mechanism.
Energy Medicine is the future of advanced healthcare.
The Human Simulation – Pinnacle of 21st-century scientific achievements.
Hypnotherapy can penetrate the subconscious and eliminate unresolved mental traumas.
Viruses Virulence and Proliferation model — Based on energy conservation laws.
Add New Comment
f
Support sf-healing.com by sending a link